Hooray! My new rune book has arrived.
I'm going to go into runes in reasonable detail when the PBP rolls around to R, I think. On a personal level, rune study has been for a long time something I've been a bit slack about. It doesn't help that one of the books I have is fluffy in the extreme (Aswynn) or that they generally take years to fully internalise anyway.
But, I have been more studious of late, and this book will help. It has had some good reviews from sensible rune-workers. 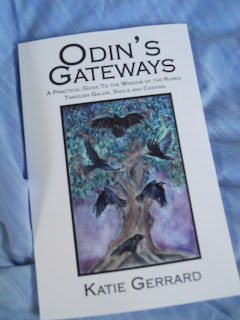 It arrived on a Wednesday, which makes me smile.
I am only a few pages into it and to be honest, it is pretty poorly written. Either that or it lacked an editor. But I think this is a situation wherein the content is more important than the way the book reads, and I hope this one helps me out. I had some minor difficulties with Eihwaz and could do with the alternative perspective Gerrard will provide.
Looking over that particular rune's notes now, it's apparent that Gerrard accesses her UPG often, but it is clearly indicated that this is her UPG, and can be discarded or filed away for consideration. I do wish she had mined the rune-poems more thoroughly for clues as to its meaning, but having said that, she takes quite a different view of it than many books about runes, and this different perspective is interesting. Many rune-readers, as relayed in Paxson's tome, leant towards meanings of balance, life and death, and so on. Gerrard suggests it's a call for help, or a rallying call to arms; a rune of protection halfway between the attack of Thurisaz and the defence of Algiz. She also gives ideas of how one might intone it - although I hate the way she conflates rune magic with galdr. Just because runes could be used in galdr doesn't mean all rune magic is galdr. Most rune magic seems to be related to inscribing the runes, not singing them.
There are elements of things that irritate me in the first few chapters. Journeying and guided meditation are very different things, to begin with, and telling someone to leave their body and journey to Asgard? not a good idea. This is a book on runes, not seidhr; she shouldn't really be telling people who have quite probably had no prior experience with leaving one's body to go to Asgard, or how to tell entities they're not inclined to meet with to bugger off. She also thinks Kenaz is fire, not knowing that the "Kaun" she did not translate means "sore" or "ulcer" rather than "fire". However, her interpretation for how that might be happens to be somewhat in line with my own interpretation so I forgive her. A little. (Really though why has she not read Pollington.)
Posted by Sanna at 3:46 PM