The seasons have truly turned at long last. Some days are warmer than others, but layers are a thing once again, as are long sleeves. Tonight the rain pours and the wind blows, and I feel warm and cosy inside, and thinking thank the gods.

Speaking of the gods. I took inspiration from the Lagutyr blog post about daily devotionals. In the past, I have tried to honour the god each day is named after, but this quickly got repetitive and I felt as if I was calling to particular deities when I'd said everything that was presently to be said a week earlier. The variation of this presented in said blog post is to speak with or honour a deity associated in some way with the god the day is named for, or one you tend to think of as being thus associated.

Last night was Sunday, and the association I drew was with Freyr. It was a very brief prayer, before my altar with hand on Hammer. All I said was:

and kissed the back of my thumb. For all its brevity, I felt wonderful for it; it felt good to be doing something small, something one could do every day - to, as OrderintheQuartz phrases it, cultivate daily devotionals. It was so minor but it leant something of a richness to my day, I think partly because it was so small. It's been a long time since I truly brought the gods into my day-to-day life, and I think it's time to do that again.

And tonight? Njord, I think. Although, for some reason, I feel like perhaps Hel...?
Posted by Sanna at 7:38 PM No comments:

In your own words
It's been forever since my last one of these. And I'm very late in posting. I wrote the draft a while ago, but haven't come back to it since. Finally, finally, the weather is getting cooler. It's been a long, long summer, and I can't wait for winter. Hopefully it will be a cold one to balance out the hot summer. I'm still not feeling very religious-y, and sometimes I feel like a failure and a disappointment to the Gods. But that's all part of how things go, I suppose.

This is supposed to be a sort of checking-in every month to see how things are progressing, but I haven't been doing much for the longest time.


Post a Pic
Here's my altar picture from the Equinox,  as promised :) 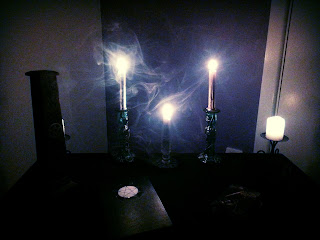 Musical musings
I've wanted to chant more lately. I'll have to find some chants or folk songs that match well for me. Few of the standard chants - most of them by Reclaiming, I think - don't really work for me. I also want to track down some good meditation music. Generally speaking, my jam at the moment has been Emilie Autumn's "4 o'clock", which is completely unrelated.


Action, Action
I've not been keeping up my daily prayer terribly well. Or my study. I've held two rituals within the last month, though, and I'm starting to get back to my reading, so that's better than nothing. Slowly but surely I'm coming back to things, and I'm getting into more discussions about Paganism.

Last week was Lokablót. It wasn't the most moving Lokablót ever; I'd been so tired the last few days. But I also offered Him some chocolate covered coffee beans and hopefully I think He was pleased. And sooner or later I should hold my Winterfinding ritual. I like to do it on the first cold day after the equinox, but I'm having some trouble deciding what counts as "cold".

This one's always difficult. I never know what to say. I had box cutter in hand the other night going through one of Ravenwolf's books for more pictures and maybe subtitles and things to slice out, the better to stick 'em on something. And I had a moment where I thought, hey, maybe a book of shadows doesn't need to be just information you already have in your head. Maybe it can be a collage, snippets of poetry, things that inspire or make you think of the topic in question, or sum it up for you visually. I also had some ideas about possible pocket shrines, so I might start being "crafty" sometime soon.
Posted by Sanna at 3:04 PM No comments: