Review: Oracles of Shadows and Shapeshifters

So I thought it was about time I did a little review of my two new backs of oracle cards. They are both by Lucy Cavendish and illustrated by Jasmine Becket-Griffith, in her trademark large-eyed style. Each comes in a nice little box with a compact book. Some people may prefer to keep their cards in bags; I tend to prefer to keep them in their boxes unless they come with a book and the box is too big (or too flimsy). These boxes are small enough that they're fine for storage, and the cardboard is solid. 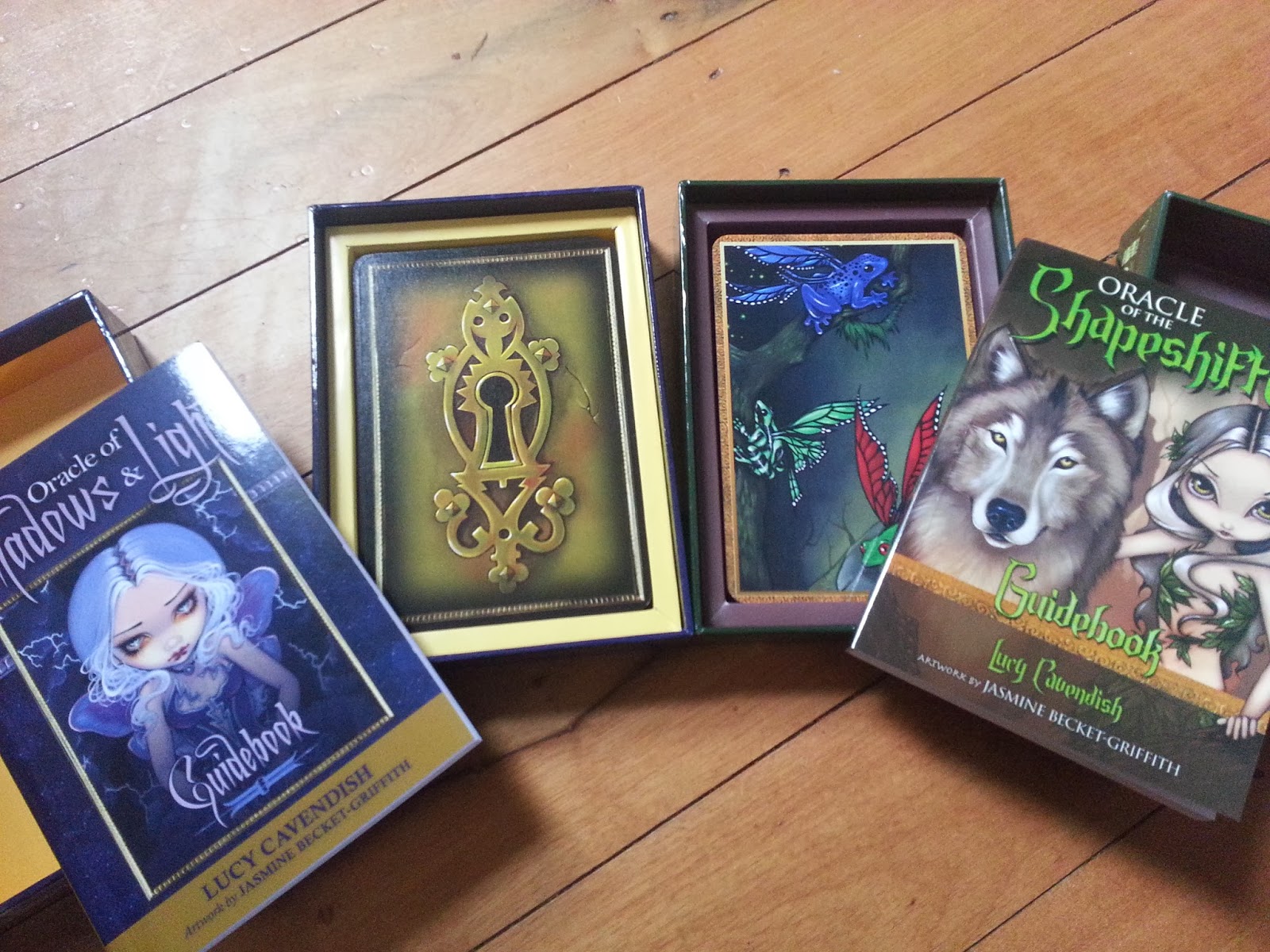 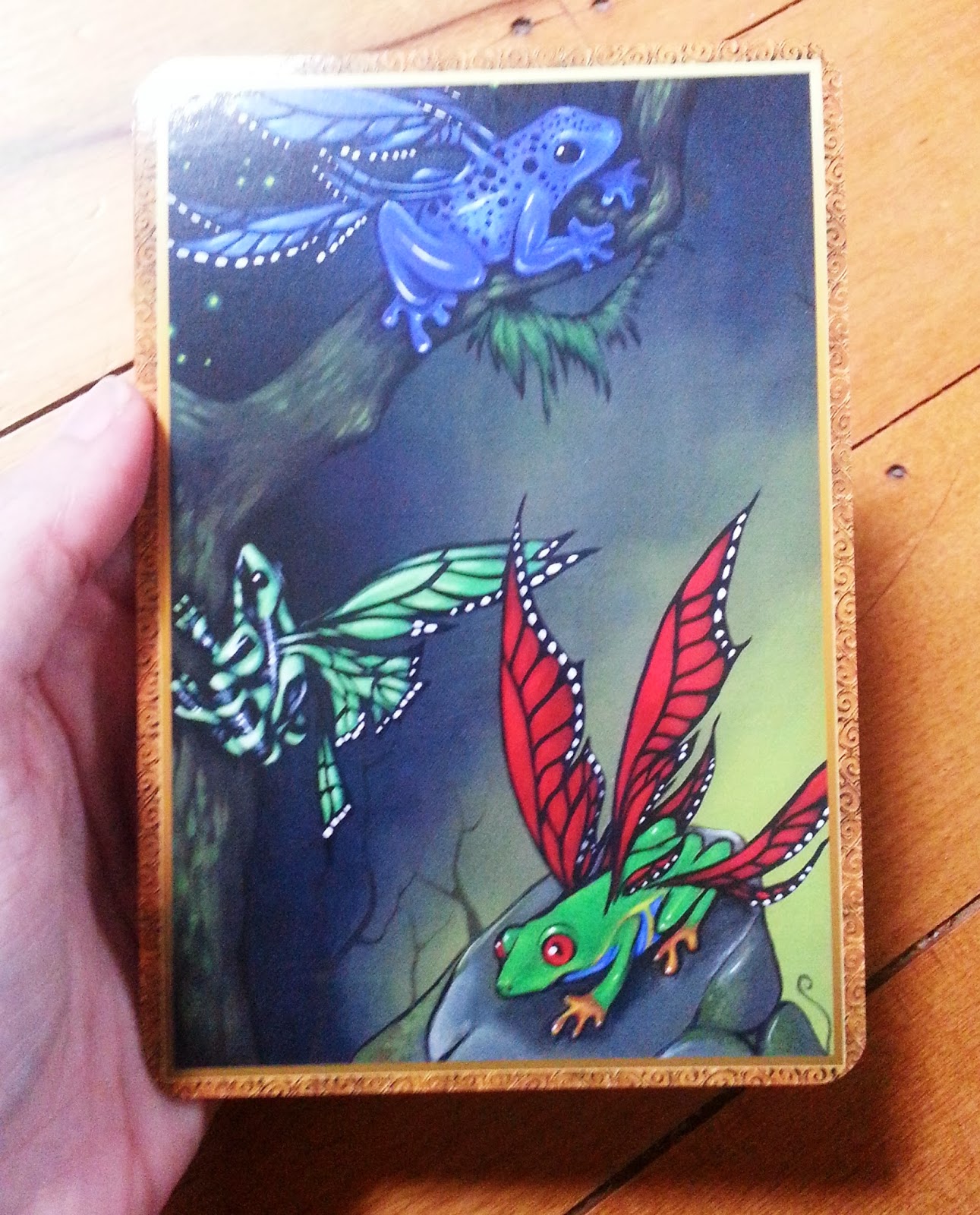 The cards are huge. They're glossy, but once you've got them out of the package and gone through them, they don't seem to stick; they're easy to shuffle. They're really quite beautifully presented. The backs are non-reversible, but there aren't reversible meanings anyway. I like how detailed they are, and how vibrant.

The books have two to three pages for each card, as well as an introduction and some sample spreads. Honestly I find the books a little difficult to parse. I've only just started working with the cards, but the book meanings don't always seem to necessarily work with the reading you're doing. Part of that may be the way I'm reading them and the questions I'm asking. Some of the meanings are kind of twee, especially when Cavendish addresses you from the POV of the card's subject, and it can be a bit tricky to get the meaning from a fairy's attempt at a pick-me-up. I get the feeling that the more general your question, the more easily they read; both decks seem to be more about guidance than questions about specific areas of life.

Each card's page in the accompanying book has three sections: an "About" that describes the nature of the card's character ("The Grumpy Red Fairy" is tired of being judged"); a "Speaks" section wherein the character gives advice directly to the reader ("Let's burst their boring bubble and go wild!"); and a "Divination Message" section wherein Cavendish explains what the card may mean in a reading ("When the Grumpy Red Fairy comes to play, it may be time to really just be your own true self"). This.... can be a bit confusing. And, as I mentioned, twee.

But when it hits on something, the three sections chime very well. Looking through Shadows and Light earlier today when I was taking pictures for this post, I drew a single card for myself. It was the Violet Angel, and she read "Breaking Dawn". The "About" section promised new beginnings, possibilities, hopes and positive changes. The "Speaks" section mentioned "there are times lately when you've felt... that your physical body has become exhausted - almost as if you were born tired!" and I can't tell you how relevant that's been to this week. I've had bad fibro days, felt weak as a kitten and beyond exhausted, so I was quite amazed to read this. It also mentioned waking up earlier in the morning, which I have been doing this week, to tend to the dogs, and take my puppy for a walk. It has been difficult, but I have been doing it. The "Message" speaks of "fresh hope after a difficult time", of early rising and trying new things. Everything felt so incredibly relevant, which is encouraging as I am having some trouble with these decks. 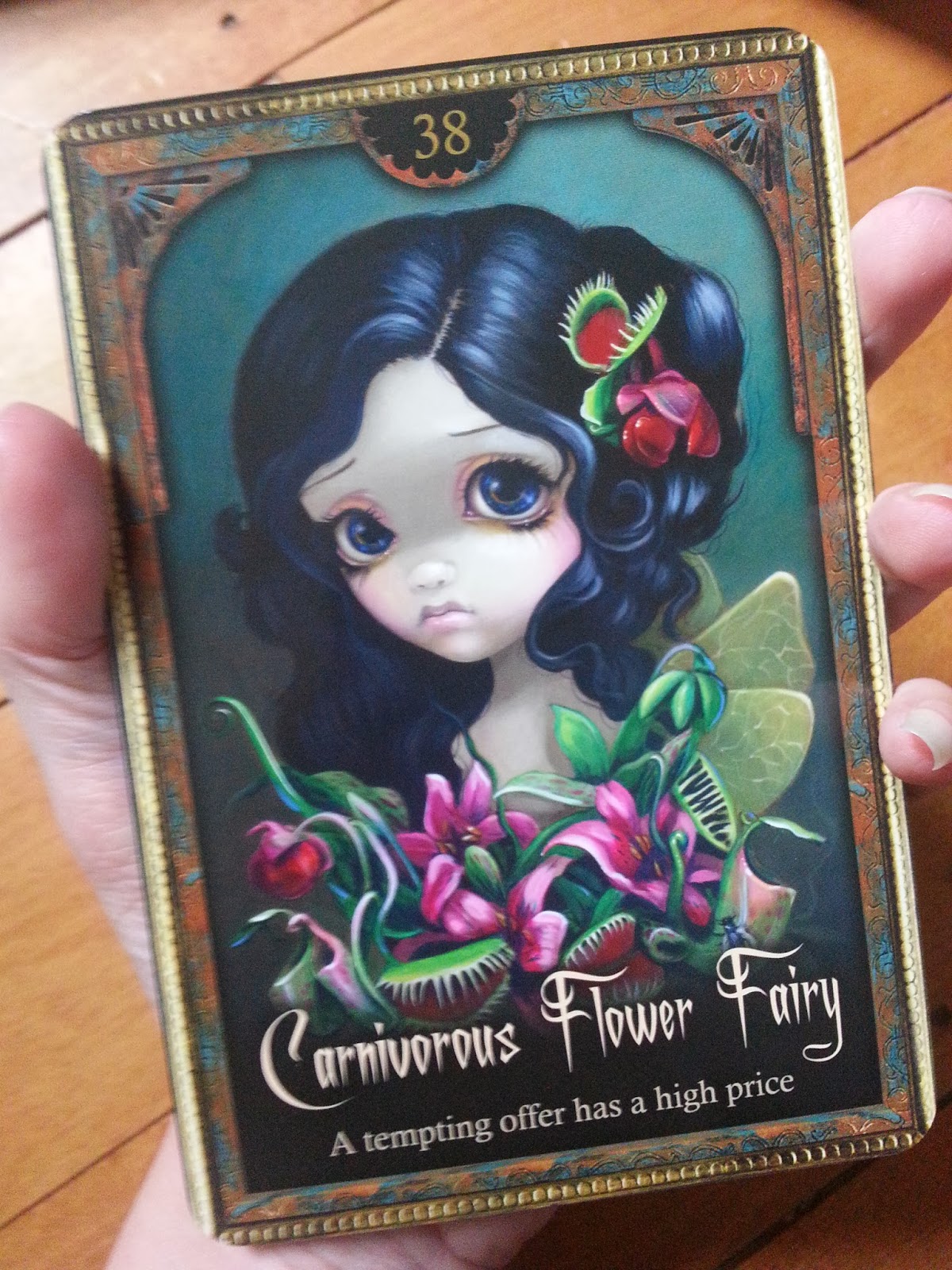 The Oracle of Shadows and Light is fairy-tale themed, but with a focus on misfits and outcasts. Personally, I'm not into the "sparkly things with wings" fairies generally, but these ones represent more sort of hidden concepts to me. So, I think because of the number of fairy cards, the number of people who would really love this deck is a bit reduced, just because some people who are into the misfits-and-outcasts aspect might be turned off by the sparkly aspect. There is quite a mix of characters, though, with angels, mermaids, and strange little girls.

The Kali card is beautiful but seems a bit out of place; she's the only goddess represented in this deck. (The Oracle of the Shapeshifters likewise has a single deity: Quetzalcoatl.) I think going with a more generic "fairy of destruction" or "angel of death" card may have been a better option.

Shadows and Light is I think made with the spiritual type in mind. There are certainly cards that encourage one to do vaguely spiritual activities such as wake up early and walk in nature. But it's still a deck that reads well for most people, and across various parts of one's life. Even the more spiritual cards have a definite physical, "mundane" aspect to them as well. My Violet Angel spoke of beginnings across the spectrum of life, not just spiritually.

Here's a sampler of a few of the cards I rather like in this deck. Autumn is my Last Chance is so sorrowful, the Two Little Witches so utterly creepy, the Shallow Grave so quiet, restful, sadly fatalistic. The whole deck is quite dark, but not in the same way as, say, the Bohemian Gothic Tarot. This deck is more about moving as one of the misfits, about the hidden secrets of the world. 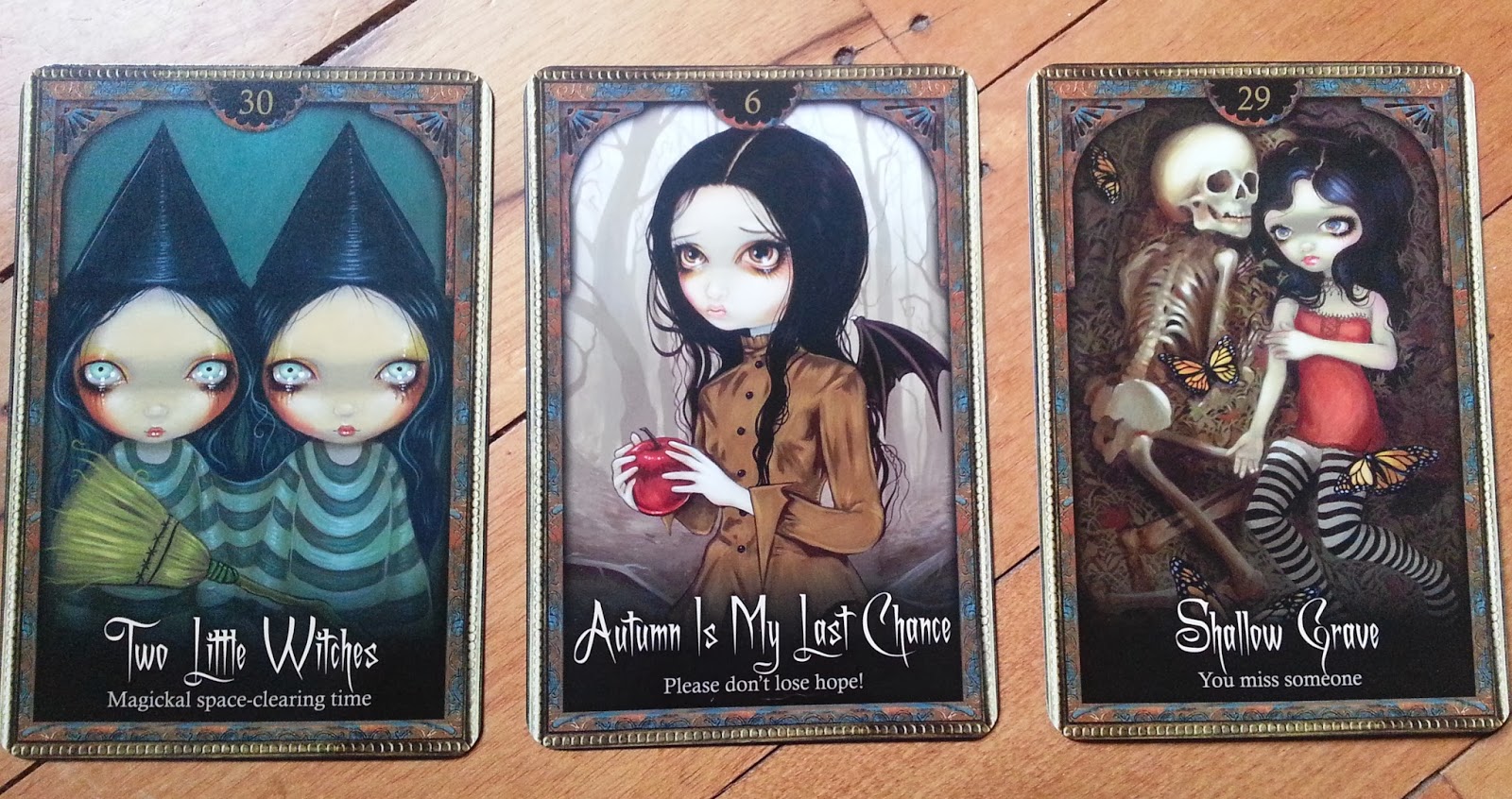 The Oracle of Shapeshifters is, says the accompanying book, about change. To me, it seems to be more specifically about spiritual growth. It sounds weird to say, but I honestly would be hesitant about reading this deck for people who don't have a big spiritual focus in their lives. I occasionally do a reading on twitter or tumblr, for friends who are kinda into tarot but not (I hate myself for saying this) "magical types", and I feel like if I read this deck for them, I'd have to "translate" parts of it. Not because they wouldn't "get it" but like they don't have the context for it or they might be a bit scornful and they'd just be like "are you serious?" or something. (Some of my friends who say "sure, give us a reading" are particularly non-spiritual types who chime in for funzies. I have no problem with that; it's good practise, they're always pleased and I especially enjoy it if a reading seems to chime with them. But I'm still not keen on saying "you'll tap into the wisdom of the stars" or something.) A lot of the meanings are geared specifically towards the spiritual aspects of your life, so if you're looking for an all-purpose deck, I don't know that this will necessarily suit your purposes. On the other hand, if you're looking for a deck to help you along your own spiritual path, this might be great for the work you're doing at the moment. I mentioned above that the Oracle of Shadows has a spiritual focus too, but I found that deck a lot easier to read for others as there is more of a cross-over to other parts of life. If I felt a bit uncomfortable mentioning a spiritual aspect in a reading, I'd avoid that element of the card. 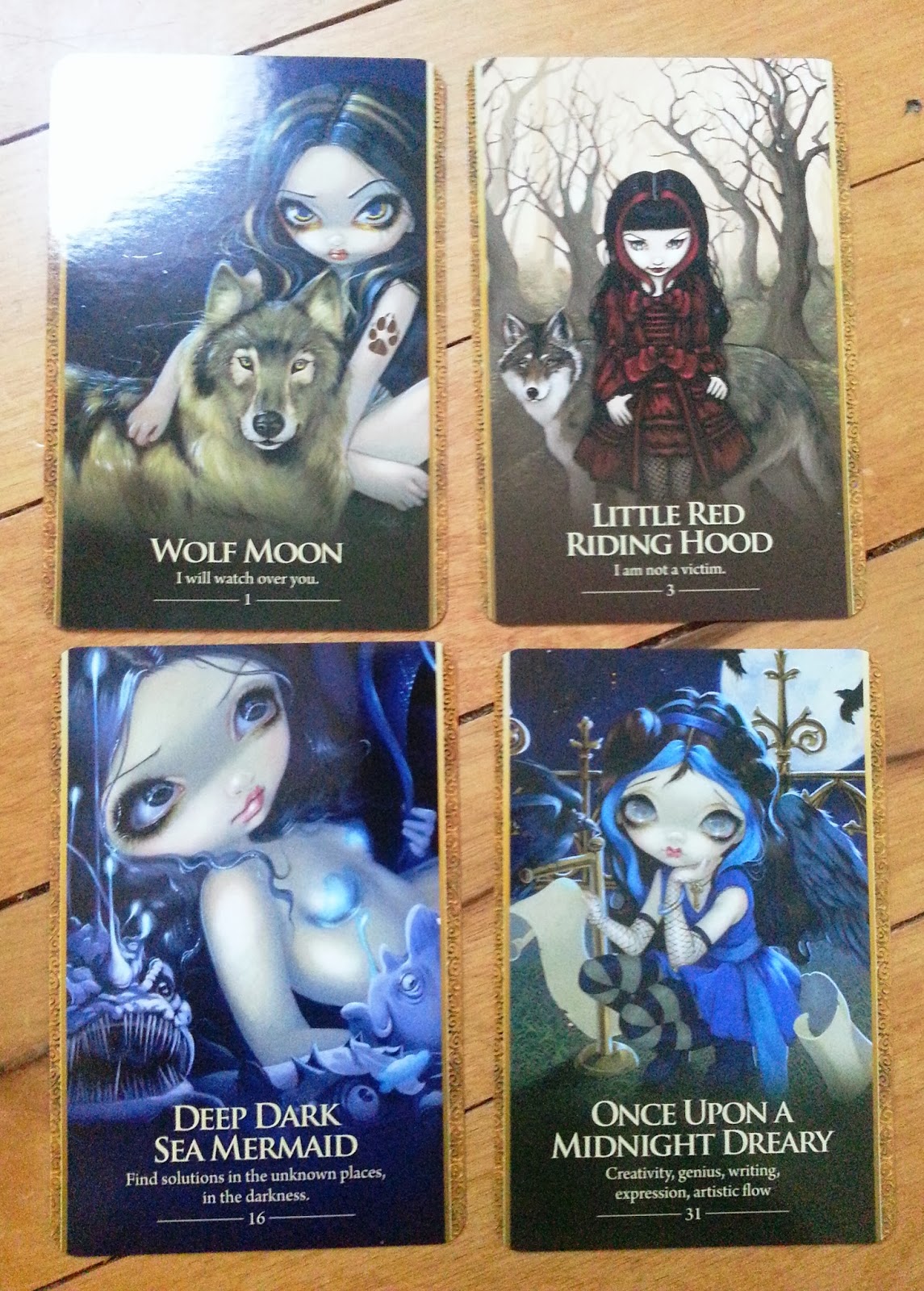 Again you have a few mermaids, a few fairies. Every card features an animal of some kind, from the impressive and popular like the wolf, to the humble hedgehog, to the poor misfits who never get spiritual representation, like the deep-sea angler fish. It feels much "greener" than Shadows and Light, which is a deck more caught in a shadowy, misty world of secrets. Shapeshifters is rooted in this world - admittedly reaching over towards that other world somewhat with its fairies and mermaids.

Some of the cards I like... Wolf Moon is the card that first drew me to this deck a year or two ago. It reminds me of a book I loved as a kid, Tanith. Little Red Riding Hood is challenge, strength and agency. The Deep Dark Sea Mermaid is curious. I can't help but think of her looking up restfully at the stars shining through the ocean, though of course it would be impossible to see them from the depths. And Once Upon a Midnight Dreary feeds into my Poe obsession. She's an obsessed little artist with clever, helpful feathered muses.

Despite some similarities, the two decks don't really mesh. I bought them both because I thought I could mix them together and make one super-deck, but upon handling them, that really won't work. They both feel very different, very separate. Little Red Riding Hood and Once Upon a Midnight dreary, for example, look like they could be picked up from Shapeshifters and slotted into Shadows and Light without a problem, but in practice it doesn't work so well. They just feel out of their element. That's not where they belong.

Honestly, these decks are worth it to me just for the production value and the art. They're vibrant and gorgeous, and the illustrations have tonnes of character. Right now, I can't speak too much about how well they read, as I've only just started working with them; I've been working mostly with tarot for years and I think oracle decks like these will take a while for me to get used to. The meanings provided in the books are unusual for me, and I have difficulty wrapping my head around them. I do think a part of that is working how what sort of things they are best used to answer. Having said that, personally I wouldn't recommend them to the cartomancy beginner. They're a tricky shape, and have a bit of a feisty nature - which, given the cards, is to be expected.

You can get your hands on the Oracle of Shadows and Light here
and the Oracle of the Shapeshifters here
Posted by Sanna at 1:40 PM