I hope everyone who celebrates something at this time of year had an amazing holiday. The cold has set in here today and I am camped out next to my oil heater. Certainly not an unpleasant time of year. My Yule celebrations were very satisfying, and I've made for myself a sort of "New Year's resolution" (Yuletide is, after all, the beginning of the new year).
The plan is thus:
One day a week on which I hold a small blót or otherwise spend time in prayer or devotional activity
One day a week on which I read lore
One day a week on which I study other materials (Heathen-related non-fiction).
No plans as yet on how I am going to work non-Heathen studies into the plan, but I figured, best to have a place to start from first. I can build on it from there. I don't want to commit to too much and then end up getting bored or frustrated and giving it away.
I also promised you a picture of my altar from my (belatedly held) Winternights. Here it is: 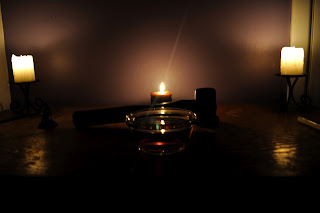 Now that Blogger has shrunk it down, it's a bit harder to see what's going on, which is a tad disappointing, but I can't be bothered going back into the RAW editor and screwing with the contrast. That's mead in the libation dish in the foreground.
I must admit I'm actually rather liking these more.... quiet, home-oriented posts rather than some of the more essay-like posts. They're quite pleasant to write and to share. One of the reasons I stopped keeping up with the Pagan Blog Project was that the amount of research I had decided was necessary for this entry or that one just made me not feel like writing them, and splorting out a post on, say, the Jotnar without some solid info in there isn't something I really want to do. I'm glad the PBP is there, though; in the future when I'm struggling to find something to post about I'll knock something out related to whichever week is most relevant.
Peace, all!
Posted by Sanna at 5:19 PM 2 comments:

I hope everyone who celebrates the Solstice had a marvellous one. I managed to forget about Mother Night, as I hold it on the night before the Solstice (when I hold Yule proper), but I held it tonight even so. It was most pleasant. Yuletide is generally a longer period for me, up to twelve days, and I honour various gods throughout. And on Saturday I will have a fireplace all to myself - save a couple of dogs - at which to warm my bottle of mead. That is something I am looking forward to. I consider the conscious and mindful lighting of a fire to be one of the most sacred and spiritually satisfying of acts.
I may post some altar photos this week. I took some lovely shots of a blót altar a couple of weeks ago.
Now, if you'll excuse me - I've another Solstice ritual to hold tonight. And it is late, and I am tired already.
Posted by Sanna at 3:02 AM 1 comment:

Email ThisBlogThis!Share to TwitterShare to FacebookShare to Pinterest
Labels: holidays

Oh hey, I was all "I'll write a big post on the lore about Loki!" and then I didn't do it. And then I was all "eh, I'll do it next week, that's still an L" and I didn't do it then either.
To be honest, other things in my life are occupying my attention at the moment. While I'm not slacking on my spirituality or my religious studies, I am slacking on this blog. For that I apologise, but at the same time, I'm not going to press myself to update when my heart's not in it. My attention tends to fluctuate, and there will come a time in the future when I'll want to post here every day, and may even do so. For now, I'm going to fall back a little and let the posts come when they may. There are times I really enjoy writing informational posts or book reviews, and there are times when I'd rather just talk about what the world is doing around me and what I'm feeling and thinking.
Right now, the sun is shining brightly but the air is quite chilly; it feels like winter has finally arrived. And just in time for Yule! I'll have to go and buy a couple of bottles of mead to keep me stocked over Yuletide as I generally go through at least one bottle at this time of year. It will be nice to sit by the hearth with a bottle warming and the dogs.
Posted by Sanna at 4:08 PM 2 comments:

OK, I know I missed another week of the PBP. I actually wrote a post, and then decided it was silly and nothing much to do with Paganism at all, so I didn't post it. This week is L, and I might write about Loki, even though I've written about Him on here before. There are elements I could touch upon such as why I consider it important to acknowledge Him in passing at the least for every intelligent Heathen, but I might just dive into folklore and post a bunch of evidence for His historical worship. (Plenty of people say there isn't any, but I don't understand why no one would worship Him and then He would crop up in all these elements of folkloric observance.) So that might be this week's aim. I'll collect a bunch of those and shove them all up.
Because I love Him, and nuts to you if you hate Him. You don't have to understand Him, but you get that hating on Him is only going to attract His attention more, right? You're better off offering a small drink whenever you drink to Oðinn as the lore implies is appropriate and otherwise avoiding insulting Him. Calling Him a f****t isn't going to endear you to Him.
Also, check it out, I'm capitalising pronouns. This is a weird thing for me... I always capitalise pronouns when it comes to the Gods of my Hedgecraft, sort of as a method of distinction.... and then when it comes to other deities I capitalise randomly and arbitrarily. I decide one day that I want to and forget about it the next. But it's pleasing, sometimes, to capitalise pronouns. It spikes me back into awareness. Plus it upsets monotheists.
I don't know why I take vague pleasure in upsetting monotheists in this sort of way. I suppose it's something to do with taking up some sort of idea or concept that are as much our right as Pagans as they are theirs - like tagging things "god" or "scripture" or "lord", knowing that a fair number of Christians will look on such a tag expecting to find things related to only their god and only their scripture. I know it ruffles feathers when they find a quotation from the Eddur under "scripture".
Hey, did I ever tell you guys about a situation on the NaNoWriMo forums? It was hilarious. The subject was something like the afterlife. A Heathen there said "to quote scripture," and quoted the "Cattle Die" stanza of the Havamal. Most people - atheists, Christians and others - in that forum were perfectly civilised, but one Christian responded "Where exactly is that, and in what bible?".
A third writer chimed in: "The bible isn't the only holy scripture out there. If I recognise that quote it's from the Poetic Edda, specifically the Havamal or Words of Odin, held sacred by many Heathens and other Norse Pagans."
The Christian got all snotty: "Pagans and heathens don't go well with the word "holy", and there's only one book of truth."
The Heathen responded with another quote from the Havamal. "The witless man, when he meets with men, Had best in silence abide, For no-one shall find that nothing he knows If his mouth is not open too much. =D"
looooooooooool.
I like to occasionally shake things, to remind people that we're here, that other religions exist, and that our faith is valid enough to use terms like "holy" and "god" and mean them. I think there are people out there who associate Pagans with Renn Faires and sparkly "fairy" wings and glitter and dancing naked on a hill somewhere (not that these things are bad in their own rights), and don't associate Paganism with real, down-to-earth religion, with people who are happy to talk theology and scripture and history and archaeology. Maybe using words they associate nearly solely with their own faith unsettles some because it marks us out as normal, as just like them - and that gives us some legitimacy.
Whatever, it's entertaining.
Posted by Sanna at 9:15 PM 4 comments: