In Your Own Words

A couple of nights ago, in the early morning, while tossing about waiting for sleep, I happened to see a glow through a crack in my curtain. I put on my glasses and got up to look out the window. The moon was full, yellow, and glowing, hanging in a dark grey sky. Small clouds were blowing across it as happens in movies set in mountain forests. A witch-moon; dark, and cold, and utterly beautiful. I thought of my Goddess, as often when I look at the full moon. It was the sort of moon that made me think to myself, "the Goddess is truly Queen of the Witches".

Last night one could barely see the moon, as a storm blew in from somewhere and my night was spent looking at the lightning flashing and listening to the rain pour and the wind gust. Thunder sang me to sleep. It was exceedingly pleasant, and today, everything smells extra-fresh, and even more like spring. 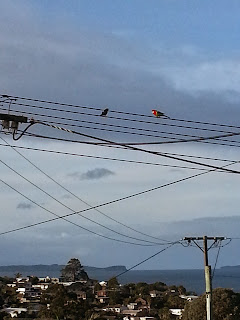 I was fortunate enough to spot a Rosella last week! It's the bird on the right, a small parrot, and they're a released species here. You're lucky to see them a couple of times a year, and generally all you see is a flash of red as they fly past you. This one was having a scrap with a tui, which are all over the place during the spring.


Musical Musings
.....Yeah, I got nuthin'. Not much to say music-wise this month, just what I've been listening to generally ("Mother We Share" - Chvrches, and EA's "FLAG" album).

Action, Action
I've been keeping up with my weekly studies, although I tend to forget about it until the last moment on a Sunday, at which time I think "shit!" and drag out my books. Generally speaking, I've been exhausted lately and I'm waiting on the results of some medical tests, so I've been trying to be generous with myself and haven't worried overmuch about whether I've been praying at altar or not. Still, I have a couple of rituals to perform in the next couple of days, and I may leave an offering to Persephone somewhere as well. I've always been fond of Persephone.


Eureka!
I think there's something about long-distance running that... speaks to a part of us as a species. And I don't mean, like, marathons, necessarily, but even 5km or so.... Which, by the way, is about my limit at the moment, and that's on a good day. A part of this feeling is probably the endorphins, and the general satisfaction at improving at something, but.... I don't know. Running, sustained running, feels right somehow. Whatever that means. At any rate, I like feeling fitter when it comes to running; religiously, I feel like the gods appreciate fitness.
Posted by Sanna at 12:21 PM No comments:

And All is Green and Blue

What the fuck is going on

Where did all these people come from

I just came on here to write a thing about spring that I've been putting off for like a month now and I've had 1000 hits?! I don't know how to deal with that. Where did everybody come from.

It hath sprung! In fact it sprung almost a month ago now. A day or two before my first-rite-of-spring, which went splendidly by the way, I saw butterflies whilst on my run. Butterflies, as I'm sure you all agree, are a certain indication that spring is upon us. They were followed quickly by the blossoming of flowering trees, the popping up of daffodils and the hatching of ducklings. The kowhai tree is in bloom. The tuis are singing. This is obviously one of those things that differ depending on where you live; I imagine down south it took quite a bit longer for spring to arrive. But up here it has been clearly spring for so long now that people's insistence that September 1st was the beginning of spring have been rather confusing to me. Did they just think it was a particularly flowery winter? Do seasons mean anything to people any more? The birds have been singing the joys of spring for a month now. I wonder to myself whether there was a time years ago I wouldn't have noticed either.

I can hear the tuis singing to one another from where I sit. The sun shines in my window. The days are getting longer. The sun is brighter, but not yet the burning wheel of fire that torments my every waking moment in the summer. And there are ducklings. Spring is a good time of year.

My First Rite of Spring went well, though in a way, it was unnecessary. Sometimes I hold my Sabbat rituals to speak to a part of my mind, or my soul, to really grok that the Wheel is turning and the seasons are changing. I didn't need to do that for the beginning of spring; I already knew it was here. So the ritual was solely celebration. It was enjoyable, and afterwards, I felt all fresh and new, like blue skies, yellow flowers, and green growth. And it is not so long now until the Equinox, when I'll change the black candle on my altar for a gold one, and really start to dread the coming of summer.