I can't believe how long I've been delaying posting! It feels like a week or two but my last post was on the 9th. Time I sat down and finished a PIP entry that's been sitting in my drafts for like two months.


In your own words

Sometimes I fall behind in my practice, and I feel a lot of shame about that. I feel like the gods will be frowny in my direction. And in some ways that's a bit ridiculous of me; the Havamal does say better to offer too little than too much. Especially with the amount of fatigue I've been dealing with on the one hand and my anxiety on the other. It's a balance I'm having to work out. At the same time, some of those feelings of shame are probably a result of the anxiety. It's something I have to keep in mind but at the same time it doesn't make life any easier to remind myself of that.

I'm exhausted at the moment, and so wound up. That's Eksmas, I guess.

Post a Pic
Here's a sunset from earlier this month ^_^ 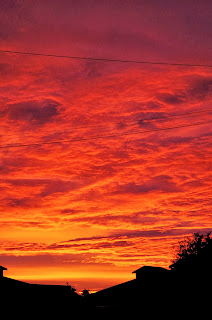 Musical Musings
Another meditation track this month! This time it's "Escape from Gravity" by Deuter. Sort of "the Shire" meets China. It's emotional and soothing and inspiring and everything.


Action, Action!
The other night's Midsummer ritual was bare-bones, and very brief. I wasn't at home and didn't have my altar or anything. In a way it was perfectly pleasant and fine, but I wish I had done it a day earlier with my altar and so on. I do enjoy ritual.

I'll do a Heathen ritual in the next few days. I have some cassis to offer, and I hope the gods like it!

Eureka!
I've discovered a much better way of learning the runes is to read the poems on a Monday and let them percolate in my mind through the week. Every so often I'll stop and have a muse, and come up with some new thought that I'll rush to scribble down. Or I'll have a spare moment, and flick open one of my rune-books to read what this person or that had to say. It's less mentally intensive than sitting down all at once with all my books, which is good, because I can work on runes for an hour and then be utterly spent for the rest of the evening.

And Helgi! The whole reincarnation thing! That was really interesting. That's one of the benefits of really making the effort with my reading, I suppose! Speaking of, I received "The Word Exchange" for Eksmas. It's Saxon poetry! Most of it is probably Christian but I'm still looking forward to picking my way through it.

Shoutout to My Boy Helgi

Tonight I read the Second Lay of Helgi. I was not a fan of the First Lay which.... confused me. I may have been over-tired when I read it. Actually, I was really over-tired tonight, but the lay is so good that I lost that tiredness. So good, you guys. MAN. Like. So romantic. I can't even.

And! Here's an interesting thing which I should save for a PIP entry but instead will just repeat it when I get around to writing that post. At the very end is the line:


It was the belief in olden times that men were born again, but that is now called old women's superstition.

And it surprised me. It surprised me because for one, although there are mentions of people being the rebirth of so-and-so, I've always read that as metaphorically i.e. they embody the same qualities as so-and-so, and read "they were born again" as "they lived on as legends". And for another, except for a brief hand-waving in one or two 101 books, and on a couple of forums, I've rarely come across this discussed in Heathenry before. Hey! Reincarnation was a thing at one point! By the time lay was written it was superstition, OK, but the Heathen beliefs spanned a fair amount of time and incorporated changing beliefs and practices. Such is the joy of a folk religion. But often when it's brought up, it's shouted down as someone's hold-over belief from when they were "Wiccan". Yep, that's right. I have seriously actually seen people put down for just bringing up reincarnation: newbie-related snarking, "This is Heathenry, not Wicca", etc.

At this point it may not surprise you to learn I no longer spend much time on Heathen forums. Or for that matter, Pagan forums generally. I'm either ducking punches or itching to punch someone myself.

Hold on, let me dig out Road to Hel.

See, this is what the Edda has done to me. I am researching stuff in academic books at 1am instead of sleeping like a sensible person.

Excellent! Good ol' Hilda has a whole section on rebirth, and she directly quotes the very section I just stumbled across. High five, internet! She also gives several other examples from the lore, which makes it all the more bothersome to me that it hardly ever comes up. Granted, Heathens tend to focus on their living rather than their dying, but on the other hand reverence of the dead is a massive aspect of the religion also.
Anyway now I am really tired, and I am going to finish writing this and go to bed. My eyes are all sore. BUT if someone ever tries to bitch you out for bringing up rebirth as a Heathen concept you can just go Oh yeah well what about Helgi?!  and that'll shut him up. Mmmmmhmm.

Oh and P.S., I didn't think Road to Hel would be available anywhere as it's a notoriously hard to find book and it's been out of print for a while, but it turns out it was reprinted early this year. As always when it comes to H.E. Davidson, it's exemplary. (I may not agree with every hypothesis she puts forward but it's damn well researched.) Grab yourself a copy.
Posted by Sanna at 1:58 AM No comments: