Hi everyone and Happy Solstice!

I'm about to sit down to my Summer Solstice ritual. Things are all over the place this year, possibly because I've been meditating way less than I should be. I feel scattered. Although, maybe that's just the fibro-brain.

A friend of mine and her band wrote a song about Christmas in the Southern Hemisphere - listen here. It's basically how I feel about this time of year. It's summer, and that's fine.... why have we adopted all these winter-based decorations? Can't we just celebrate the season we have? It's a great time of year to have Christmas. You can put strawberries in your champagne. You can play cricket on the beach. You can sit up until the sun sets around 9pm drinking gin and tonic on the deck. It's a great time to get together with family and exchange gifts and celebrate. And it's not like Midsummer wasn't a big celebration and time of gathering for the Heathens. Though they may have held it later in the year. No matter; the summer holidays basically last through until February. No one is expected to be productive from mid-December right through January. We even have two days off for New Years, presumably because everyone is expected to have a two-day hangover.

It's sort of odd, having been a Heathen and of a specific form of Hedgecraft for so long at this point. I saw a post on tumblr that used the phrase "Celtic Yule blessing" and my brain turned inside out in an attempt to wrap itself around that concept. Celtic. Yule. I went through "The Celtic religions don't celebrate the solstices!" and then "Why would a Celtic Pagan use the word Yule? That's a Norse holiday!" to a point where I tried to work out how a Celtic Pagan would even adapt a Heathen holiday for their own use, and why they would want to.

It was hours later that I realised they didn't mean Yule, they meant eclectic-NeoPagan-Sabbat-at-the-winter-Solstice. Literally hours later that occurred to me. And then I got very slightly sniffy about it. Not of the "THEY NICKED OFF WITH OUR HOLIDAY NAME" variety, but of the "WHY WOULD THEY CALL THEIR HOLIDAY YULE IT JUST FUCKING CONFUSES PEOPLE" variety.

My brain still refuses to parse "Celtic Yule" as a concept. I just revert to "YOU CAN'T HAVE CELTIC YULE, THAT IS NOT A THING THAT HAPPENS". Then I throw up my hands and mutter to myself. Not a jab at OP, either; the person who posted the post was being helpful and is just repeating the basic ENP stuff that's been floating around for decades. It's not really vexing, it's just one of those things I find really odd and confusing. It probably annoys Celtic polytheists more than it does me.

I've been seeing quite a few hedgehogs recently. Mostly squashed on the road. Last week I saw a little one rolled up in a sleepy ball under a hedge, and tonight, while I was walking my dog, I saw a little dark shape waddling across the footpath. It was a snuffly little hedgehog and he disappeared into the grass. My dog did not know what to think. Are they naturally more active in summer, or is it hedgehog breeding time, or what? I like seeing them around. Sweet little things. Plus they eat slugs, which is a godly duty.

Anyway. Time to take out the candles and set up the altar. It's ritual time.

I like to do these on the full moon, which is still a few days away, but now I've had the thought to post if I don't do it now then I'll forget and it'll be another three months before I get around to it again. But I wanted to do one, because there were some things I wanted to post. Although now I'm here I probably won't be able to remember what they were.

In your own words
Man, what to say. I feel... good. I mean, health-wise, I'm always up and down. Yesterday was really hard with fatigue and sore tender points on my hips, but I have a lot more energy today. I'm learning to take the bad days as they come, and recognise them and take the time to rest.  You can't always do all things all the time. I'm getting really into the "planning" community, filofaxy stuff and that, and I've put a kikki.k planner on my Hexmas list (thanks Evil Supply Co. for that one!). I'm all into paper-crafty stuff, and papers and stamps and pens at the moment.... I mean I've always loved stationery and this gives me another out to go MAD with buying bits and pieces. If I could ever work out what exactly I wanted to go in it, I could put all this stuff to work in my Book of Shadows!

Post a pic
Here are a couple from my area. The first is a kererū, or NZ wood pigeon, sitting on the kowhai tree in my back garden. They love those things and fight with the tuis over them in spring and early summer. The second is one of the local beaches. The island on the right is the volcano Rangitoto. 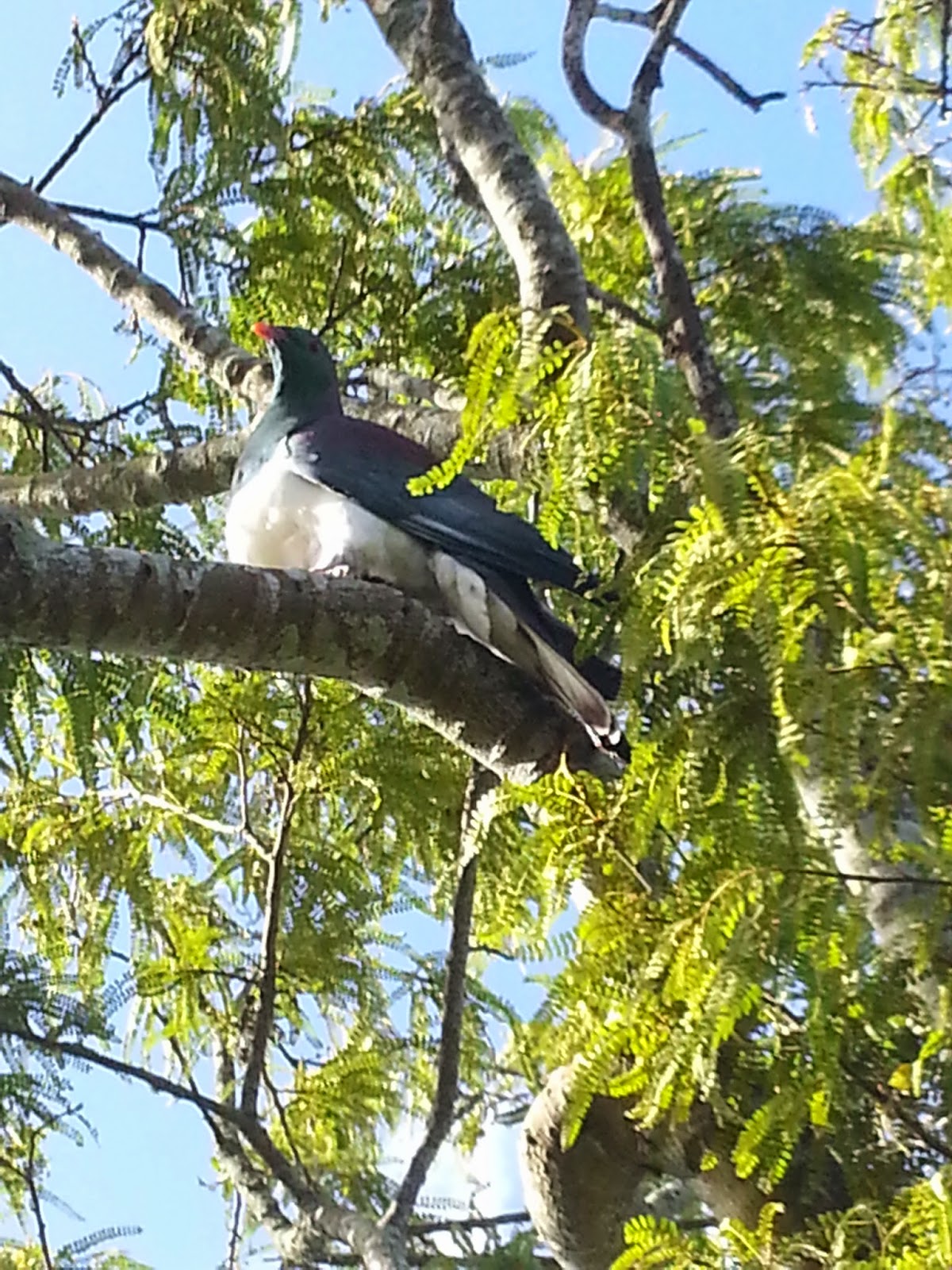 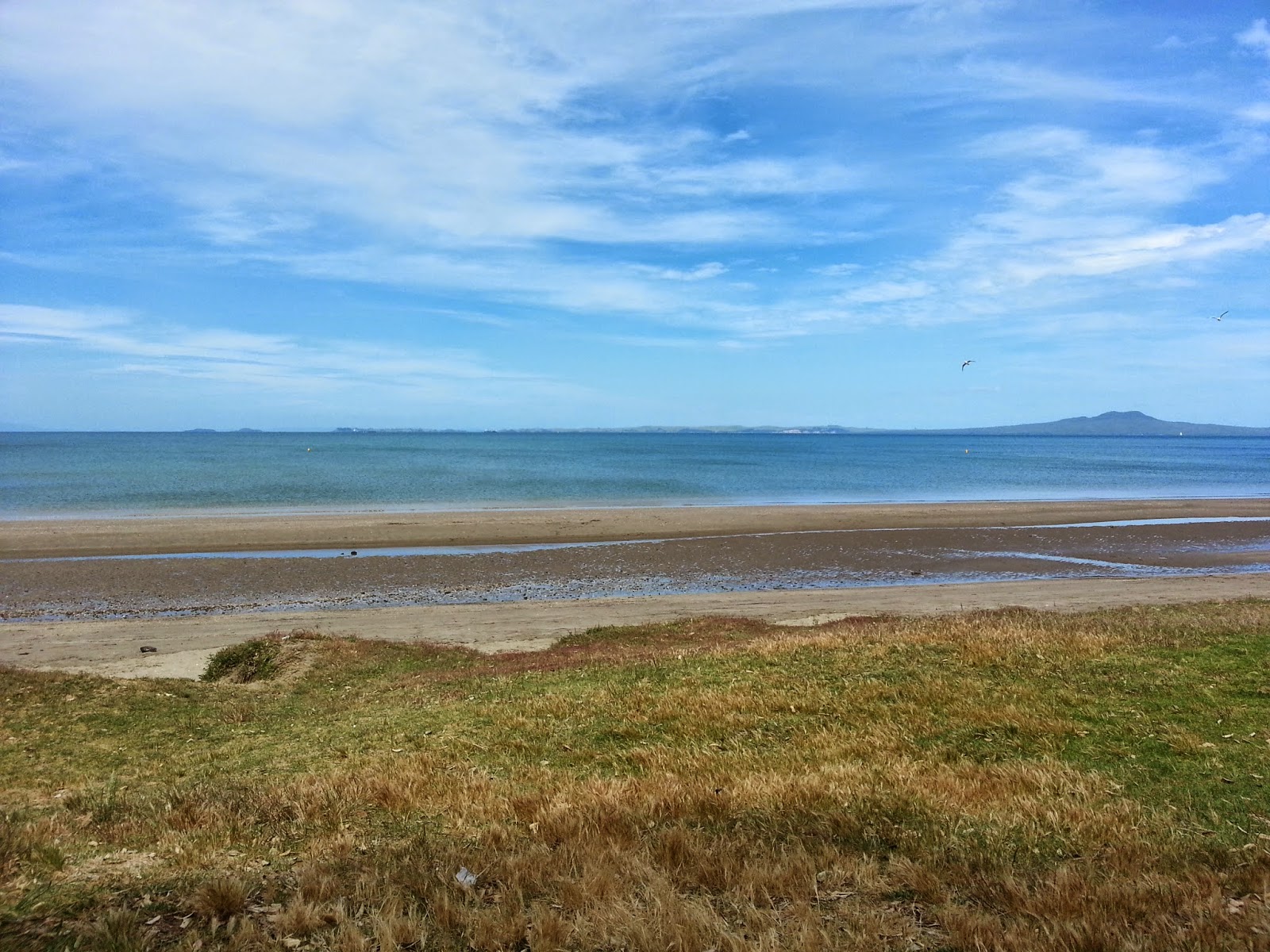 Musical musings
Why is the thing I post here never really all that Pagan?
My song of the moment is Lorde's Yellow Flicker Beat. I love this girl's groove. Did you see her at the AMAs? Daaamn though. Fuck it I'm just gonna post that video, because that lipstick smudge is PERF.

I love the way she dances. There's an ecstatic element to it.

Action, Action!
All my rituals seem to be late lately. I bought some framboise liqueur for Hel, Freyja and Freyr. I love that flavour, associate it so much with Hel. It's really more of an autumn thing, but my choices were limited. I've been slacking on my studies, which is bad of me. I tend to remember on Sunday night and think "welp too late now". I have to learn to plan my time better and then stick to that plan (which is the hard part). My head's always in the clouds.

Eureka!
I'm learning so much about history from Our Troth I. I assume it's accurate enough, though I'm not putting huge amounts of trust in it, as you never know when the author is not an established historian. So much of the stuff about the "Steppe Peoples" or early Indo-Europeans, pre-migration, is so fascinating. There's a long section describing ideas of who their gods were, and that they honoured "the sky gods on rectangular altars facing east, and the terrestrial gods on round altars facing west".  The idea of Tyr and Odin as descended from a one-handed "Bright Father" and a one-eyed "Seer" respectively is fascinating. Recommended reading for Heathens, definitely.