I talked a few posts ago about my naked altar. I've been going through some photos on my little Nikon coolpix and transferring them over to the computer, and I found a couple of shots of my Old Year's Night/Samhain altar. This is essentially as crowded as my altar has ever been, though there's an item or two you may not be able to see well as they are dark items on a black altar cloth. 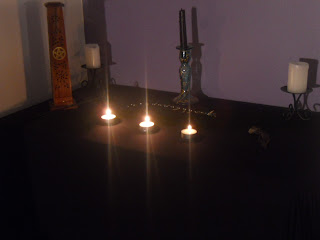 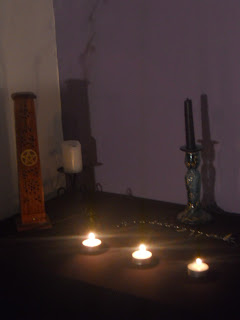 The pictures were taken after the ritual. The three candles are burning for the dead in offering. The black candle in the middle is a focus candle, lit during ritual. The white ones on either side are illumination candles, to keep the ritual well-lit. There's a bird's wing on the right, my witch's ladder (more on those another day) spread out in front of the black candle, and my incense burner on the left. It makes the incense smoke billow wonderfully, as you may be able to see in the second picture.

Note that my Hammer isn't in residence on my ritual altar; this ritual in particular is for my Hedgecraft and isn't related to Heathenry, so the Hammer is placed elsewhere for the ritual.
Posted by Sanna at 8:43 PM